I met my guide on the way to the park entrance. He’d approached me, introducing himself as such and explained the different parks in the area, the entrance fees, the guide fees, etc. He said he’d been a guide for 10 years and seemed like decent enough guy, so I made no effort to dissuade him or find another.

After paying the entrance fee of 25,000 Ariary, my guide led the way, introducing me to the plants and pointing out which were endemic to Madagascar, and which could only be found here in Andasibe. He pointed out a few with medicinal value, but I can’t for the life of me remember how to pronounce them let alone actually spell them.

[Used in a tea to alleviate upset stomachs. The mouse lemur feeds off the berries.]

We came across some palm-something plants, and my guide began curiously poking around where the cluster of wide, long leaves sprouted out in search of a frog. The frog climbs up when it’s cool and at night, then burrows down deep into the base of leaves when it is hot. He said the best time to find them is before 7am, and it was shortly after 8, but he did find one. This is just one of many species exclusive to Andasibe.

[Hardly bigger than my thumbnail. If only I could remember what it was called.]

We journeyed a little further along when he stopped me on the trail and asked me to wait. After a quick assurance that I was in no danger (I already knew that there are no venomous snakes or predators larger than a small dog), he scrambled off into the brush.

A few minutes later, another guide came running down the path towards me (and the pair of tourists just behind me), and told us to follow. They’d found family of indri.

We followed up the trail, then deviated off into the underbrush, and there they were. Reminiscent of 4 year olds in costume as something between pandas and monkeys, they were much larger than I’d imagined but swung through the canopy with remarkable grace.

We followed them for a bit, bumping into more tourists-photographers on the way, but the indri remained too high up in the canopy for a decent view let alone good shot. My guide explained they’d come lower as they day gets hotter, so if I was satisfied, we could carry on. He assured me we could go back, but I didn’t know if I believed him. I didn’t know if I really cared. I saw indris.

We didn’t get much farther before we bumped into one of the tourist-photographers again who ushered me hastily to follow them into the brush. I didn’t know what was going on until right there, a family of golden sifakas played on the ground. Three adults and an adolescent wrestled and played and swung about, uncaring of our presence.

We were able to get very close and followed them for quite a bit before I heard little piggy-grunts from high up. Brown lemurs had come to see what was going on, but remained too high up in the canopy for a good look. A few of the guides mimicked their call, but the best I could see of them was when I was directly beneath, looking up. I saw something fall, but I was in a tangle of brush with little time to react and it hit me.

I got peed on by a lemur.

It was just a few drops, mind you, but my guide didn’t seem to know how to react on my behalf, so offered to wipe it off my arm with his sleeve, but it was more places than that… I laughed it off, genuinely – I mean, come on, I just got peed on by a lemur – and explained that where I come from, if you get pooped on by a bird it means good luck and asked if it meant anything with lemurs. He just smiled and said “luck.”

We hadn’t got much further along the trail before he stopped me again, pointing out a nocturnal species sleeping in a cluster of leaves. I couldn’t find it for the life of me until my guide shook the tree and woke it up. The “oule” lemur (I’ll have to look this up later), looked down at us with indifference before going back to sleep.

The sun was getting hot, so my guide said the indris would likely be lower now, and asked if I’d like to go back, I said sure and followed him through dense trails with absolutely no concept of direction.

It wasn’t long, though, before we found them again and he was right: they were much lower and watched us curiously from their perches in the trees.

Once satisfied, we carried on through the trails. I’d asked for the longer of the routes, “route de l’aventure”, and adventure I got. I followed my guide through dense rainforest, past little falls, over bridges. He’d pointed several species of bird, only one of which I could pronounce the name of and it sounded something like “cucka-rolla”, a little larger than a blackbird and able to mimic the other bird calls.

When we returned to the gates, he pointed out a lizard napping in the shade of the bridged walkway and, even after I’d paid him and waited for the receptionist to return to get my pack from the office, came and found me to show me a chameleon hanging out in a tree. 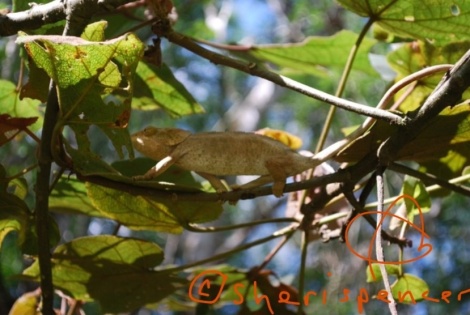 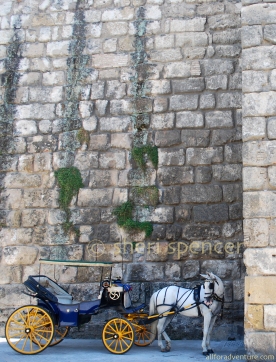 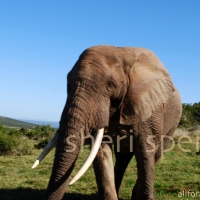 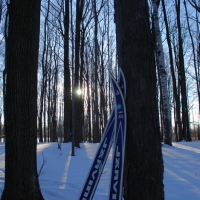 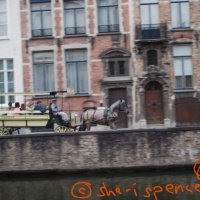